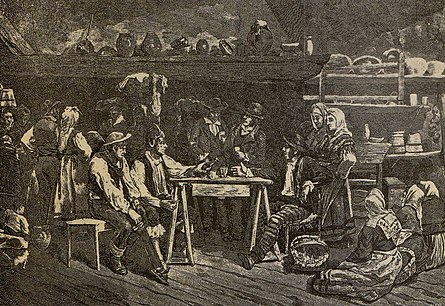 Chigre is the equivalent in Asturiano to the Castellano word taberna and somewhat analogous to the English term tavern.[1] In contemporary usage in Asturias, it means a bar that focuses on serving cider, as opposed to beer or wine. It may have both of those other options as well, but the majority of their business will be done in cider.

The chigre rose to prominence during the industrialization of Asturias. In the 19th century a profound change swept over Asturias. Mining exploded in the 1830s and ’40s, transforming the predominantly smallholder inhabited Nalón and Caudal valleys into the industrial heartland of the peninsula.

These cuencas mineras – mining valleys – became the first urbanized areas in Asturias, as young men moved to the environs of the mines for work. In doing so, they moved away from their caseríos – farmhouses – and the barrels of cider so typical there. Around 1843, La Industria, a glass factory in Gijón, pioneered the glass bottle now so associated with cider in Asturias. In that bottle, the cider followed the workers from the farm to the mine, and later the foundry. A place was needed for drinking this cider. In their villages people would congregate underneath an hórreo or in a cuadra where the barrels were kept. Without these communal meeting places, a new solution arose; the chigre.

José María López Dóriga, a doctor and writer from Oviedo wrote in the late 19th century of the explosion of these taverns throughout Asturias.[2] According to López Dóriga, they were the dive bar of the time. Perpetually under lit, smoky, and potentially violent, a late 19th century chigre did not bother hanging out a sign like the cafe-bars that hoped to attract tourist traffic. The locals knew where the chigre was, and could find it without any trouble.

Some of them would, in a rather coded fashion, subtly announce their presence by placing a laurel branch above the door and/or hanging a small curtain across the top half of the doorway. Occasionally a small red and white flag or banner was hung to announce that there was wine to drink in addition to the ubiquitous cider.

Inside the dim room there would be a counter from which to get your cider. There might also be a small table laden with tortilla de patata, hard-boiled eggs, pickled herring, and bread. In autumn, chestnuts might join the other snacks. There might be a square table for card playing as well. The rest of the furniture would be barrels. Some empty, some full; the tops would serve variously as tables, seats, and chalkboards for recording the debts of the regulars.

A chigre was not a place with a good reputation. Poor ventilation, constant tobacco smoke, and a very good chance of getting in a fist or knife fight characterized the chigre in the popular imagination of the time.

Today the chigre is a much cleaner, safer, and more salubrious location. However, the best of them retain much of the original character of their forebears. Many are the chigres without a sign to announce their presence. They remain stubbornly local. And while unknown visitors are welcome, chigres hold fast to their hyper-local history and function.

The chigre is almost always small. A short bar counter and a table or two suffice to describe the majority of them. While many of them now offer a small menu of things to snack on, some offer little more than a bagged snack or two, or perhaps a slice of tortilla. Cider is the thing. Cider and conversation. As always, the chigre is primarily a social space. Lights are normally dim, in contrast to the almost clinical over-lighting one finds in many modern Spanish bars. Recorded music is rare. However, singing is still encouraged, and knowing a few tunes will go a long way towards fitting in and making friends. I have rarely, if ever, encountered a TV set on the 24 hour news station in a chigre. That’s a blessed change from the norm in other types of bars.

It is rare to find a chigre where the cider is poured for you. At this type of establishment, everyone assumes that you are capable of escanciando for yourself. 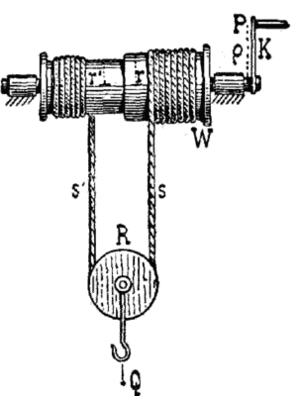 There is a second meaning for a chigre, the English equivalent being the windlass. That meaning came first, and the screw action of the windlass became a slang for the corkscrew bottle opener needed for the new-fangled bottled cider. From there it became applied to the place one might need a corkscrew, the cider bar.

Completely unrelated, but the American English word chigger for the tropical sand flea Tunga penetrans was once commonly spelled chigre as well.

Retrieved from "https://eatingasturias.com/index.php?title=Chigre&oldid=5713"
Categories:
This page was last edited on 5 January 2023, at 16:14.
Content on Eating Asturias is available under Eating Asturias License unless otherwise noted.
Privacy policy
About Eating Asturias
Disclaimers